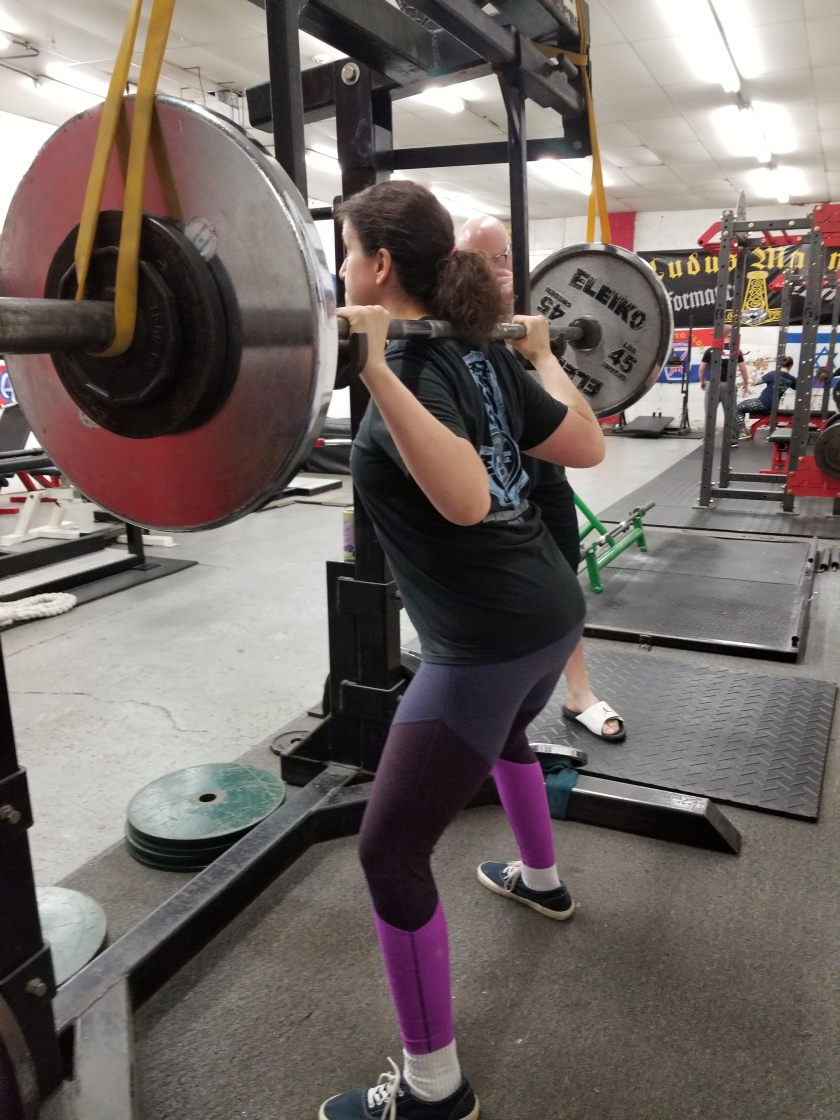 What did I do to commemorate this milestone birthday?

Well, for one thing, I renewed my driver’s license. I know how to party, right?

Standing in line at the BMV hardly seems to warrant a blog post. Pretty boring stuff.

Sure, today standing in line at the BMV is just another mundane adult task that requires minimal effort.

But a few years ago? Different story…

I had just turned 37 and was a few days overdue to renew my drivers license. I was also dealing with a significant back injury. I had injured my back at work about a month prior, and had attempted to go back after a week. That was a costly mistake, and I then found myself in worse shape than ever. I wouldn’t return to work for almost six weeks.

That trip to the BMV was one of my first times driving since re-aggravating my injury. A few days before, my best friend had driven me the 30 miles north to my hometown so I could visit with my mother and sisters for my birthday. I couldn’t drive myself that far. Once at my mother’s house, I remember my older sister helping me get situated on the couch with pillows propping my back. I was embarrassed that I needed so much help, but deeply grateful to have so many loving people in my life who were there for me when I needed them.

I went to the BMV after one of my thrice-weekly trips to the chiropractor. I don’t know what was up that day, but the line wound all the way through the office and out the front door. I was scared. I knew I would be standing in line for quite awhile. Frankly, I didn’t know if I could do it. Standing for any length of time was painful (well, at that point doing anything was painful. Standing, sitting, laying, you name it…)

But I was already late to renew my license and didn’t have extra money to throw away on fines. I stood in line that day for over an hour. I made it through by loading up on ibuprofen, distracting myself with my phone, deep breathing, and some stretches. At that point I didn’t care if I looked crazy. And it was a crowded BMV after all, so an overweight woman stretching out her back was not the strangest thing going on in that office. I went home afterwards, exhausted, and laid on an ice pack the rest of the day.

That was my life. I left the house maybe once a day, usually to the chiropractor or to run an errand, and then I went home and laid on ice packs and worried about the future. Would I ever be able to go back to work? Would I run out of money? How was I going to live? Was this my new normal? To always be uncomfortable and pained by the most basic tasks of daily living?

As with most things in my life, I comforted myself with food to get through it. Which I knew was only compounding my problems, but in my misery it was one of my few sources of pleasure. No matter how much pain I was in, I somehow always managed to get to the grocery store to buy ice cream.

Imagine if some fairy godmother had appeared to me in the BMV that day and said, “Hang in there, Jennifer. Four years from now when you come back to renew your license again, your life will be utterly transformed. You won’t be in pain all the time. Not only that, you will be 100 pounds lighter and exponentially stronger. Hell, you will be helping other people get stronger and improving the landscape of their daily lives.”

I probably would have smacked that fairy godmother right in the mouth with my purse (if I could have managed it without going into spasms). To say I wouldn’t have believed her is a massive understatement. I would have thought it a cruel joke; such a reality was beyond my ability to envision.

Six months later, following the example of a friend, I went for my first session with Matt Wenning at Ludus Magnus. (For a more detailed account of my early days at Ludus, see Patient Zero.)

And here I stand four years later, stronger in body and mind than I have ever been at any time in my life. I certainly do not claim to have arrived at some state of perfection (as if that is even really a thing). I still have goals and things I would like to improve about myself. But for the first time in my adult life, I have a body that (mostly) works.

When I was obese and out of shape, I knew that my weight made daily life more difficult. I didn’t realize just how difficult until I got stronger and I had a new standard for comparison. It’s astounding what a person can get used to, what becomes normal.

A dear friend of mine lives on the third floor. I used to be winded by the time I got to her apartment. Now I bound up the steps like they are nothing. When I got down on the floor at work, I had to hold onto something and struggled to get back to my feet. Now I get up no problem, and can even (gasp!) squat down to reach something on a low shelf.

And I can wait in a long line at the BMV without it wrecking my body for the rest of the day. It’s not even a blip on the radar.

Best of all, now I get to help my clients make similar changes in their lives, and hear their stories as they report back to me all the ways their daily lives are improving, from the mundane to the extraordinary.

February 19, 2014, was a pretty low spot for me. I share my story because I know all too well what hopelessness and desperation feel like. I also know the power of small changes and everyday choices that over time can utterly transform the landscape of daily life.

When people make the usual well-meaning jokes about being “29 again” or “20 twice over,” my response is:

If you are feeling stuck, know that there is hope to be found, one change at a time. Reach out and let’s get started! Call 614-517-2520 or email gtlwithjennifer@gmail.com. You can also find me on Instagram @gaintoloseblog or on Facebook @Gain to Lose with Jennifer.