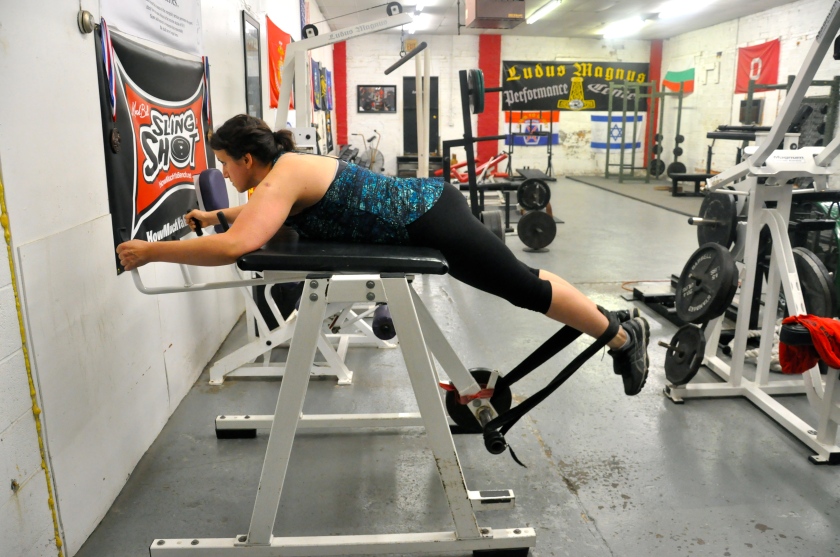 As I have mentioned in previous posts, my journey to strength training at Ludus Magnus began with back pain. Chronic, limiting, debilitating back pain.

I lived with it every day. Some days it was a low-level ache, a kind of white noise that lingered in the background of my daily movements. Other days, I would have recurring spasms in my low back, accompanied by sharp stabbing pain in my ass cheeks that radiated through my hips and down my legs.

In hospitals and doctors’ offices they have pain rating scales such as this where they ask patients to assign a number to their pain level:

I lived between 4 and 9. Even with chiropractic care and massage therapy 1-3 times per week, daily ibuprofen, regular stretching, and multiple icing sessions per day, it never got better than 4.

I’ve had issues with back pain since I was a teenager. When I was in college I took loads of ibuprofen and had prescriptions for muscle relaxers to ease the chronic aches and pains of those long walks with heavy backpacks. The first time I seriously “threw out my back,” I was in my mid-twenties. I bent over to pick up my little dog, and my low back exploded with stabbing pain and spasms. That led to several days laying on my back with pillows under my knees, steroids, muscle relaxers, and prescription painkillers.

Working at Trader Joe’s, back pain was a constant issue. My obesity and weak back coupled with the fast pace, heavy lifting, and my own insane work ethic where I constantly pushed myself too hard, was not a great combination. Over the years I had a few workmans comp claims related to back “sprains” that involved brief leaves of absence from work and stints on light duty.

But none of those compared to the big one that hit me in January 2014. I remember it vividly. We were having an awful, crazy Sunday morning at Trader Joe’s. Our truck that delivers the perishable goods, which usually arrived at 4 am, didn’t arrive until almost 8 am, right before we opened. Sunday is the busiest day of the week. We had a store teeming with customers and empty produce tables. I was lifting and stocking heavy boxes of bananas as fast as I could. Then the bagged citus, oranges, lemons, limes, grapefruits. My back had been inflamed for several days leading up to this, and I could feel the fire rising in protest. But the pressure was on: so many customers wanting product that was still sitting in the backroom.

People kept asking for bagged apples. I went back to get them. They were buried behind other less-essential product, much to my chagrin. I began digging out the heavy boxes one at a time. I picked up one of the boxes, and suddenly I felt as though I had been hit by lightning. I saw stars. My ears rang. My low back exploded in a series of spasms that took my breath and doubled me over, I had to grab onto a stack of boxes next to me. Tears immediately welled up in my eyes.

I knew I was screwed. This was bad. Very, very, bad.

One of my managers, Jeremy, was standing right in front of me when it happened . His eyes got big as saucers. He asked me if I was okay. I shook my head “no.” I went to the breakroom to sit down and see if it would pass. I could barely walk, each step brought more spasms. I sat in the breakroom, trying to take deep breaths and calm down. I put a bag of frozen peas on my back to lower the flame, but it was no use. My coworkers were worried and supportive; they all told me to go home. One of the managers even got my car for me, which was parked a few blocks away in one of the garages. There was no way I could have walked that far to get it myself.

I hobbled out to my car and somehow managed to get into the drivers seat, unsure how I was even going to drive. I sat there and sobbed. I had really hurt myself this time, and I was terrified. Mercifully, I made it home.

That night was one of the worst of my life. The pain was excruciating, and unrelenting. No position offered relief: sitting, reclining, laying on my back, laying on my side, it didn’t matter. I didnt go to the ER because I knew they would just give me prescription painkillers, which I wasn’t willing to take now that I was living a sober life.  I had called my chriropractor and he told me to be at his office first thing in the morning. Ibuprofen wasn’t even touching the pain.

All I wanted was sleep, but pain kept me up most of the night. At one point I went to the bathroom, and just sitting down on the toilet induced something called a Vasovagal Attack. I got light-headed and dizzy, my limbs all went numb, my ears rang, my vision blurred, and I felt like I was going to throw up. Grabbing onto the bathtub next to me and somehow getting down onto my hands and knees kept me from fainting. I crawled back to bed with the room spinning. As my doctor later explained to me, my nervous system was so overwhelmed by the pain that it affected my heart rate and blood pressure, bringing on the attack.

It was a rough night. I probably should have called someone for help, but I didn’t want to wake anyone in the middle of the night. And I blamed myself. In my mind, if I hadn’t been going so fast, being so careless with my body just for a few groceries, I wouldnt be in this mess. Because when injured, I can usually be counted on to compound the problem by beating myself up.

Recovery was long, painful, and slow.* I was off work for six weeks. An MRI revealed a bulging disc at L5 and the early stages of arthritis in my spine. Arthritis has been a devastating force on both sides of my family. My mother isn’t even 70, and has had both hips and one knee replaced. My paternal grandmother is permanently hunched over from severe arthritis and osteoporosis.

I was only 36 years old. I had a vision of my future, and it wasn’t pretty.

So how did I get from where I was in 2014 to where I am today? Then: hobbled and barely functioning, living between 4 and 9, eating ibuprofen every day, and seriously obese. Today: living (mostly) without pain, rarely using OTC pain relievers, strength training without injury for almost three years, more than 80 pounds lighter, and training clients of my own?

Sure, diet and exercise is the knee-jerk response, but the true answer is more involved than that. What was the key to shedding my back pain? Tune in for Part 2 to find out!

But I’ll give you a hint: the real problem wasn’t in my spine. It was in my ass.

If you are interested in joining my other clients already working with me at Ludus Magn.us, please call 614-517-2520 or email gtlwithjennifer@gmail.com!

*For a description of where I was at physically just before starting training with Matt Wenning at Ludus Magnus, please see my post Patient Zero

3 thoughts on “Anatomy of a Pain in the Ass”