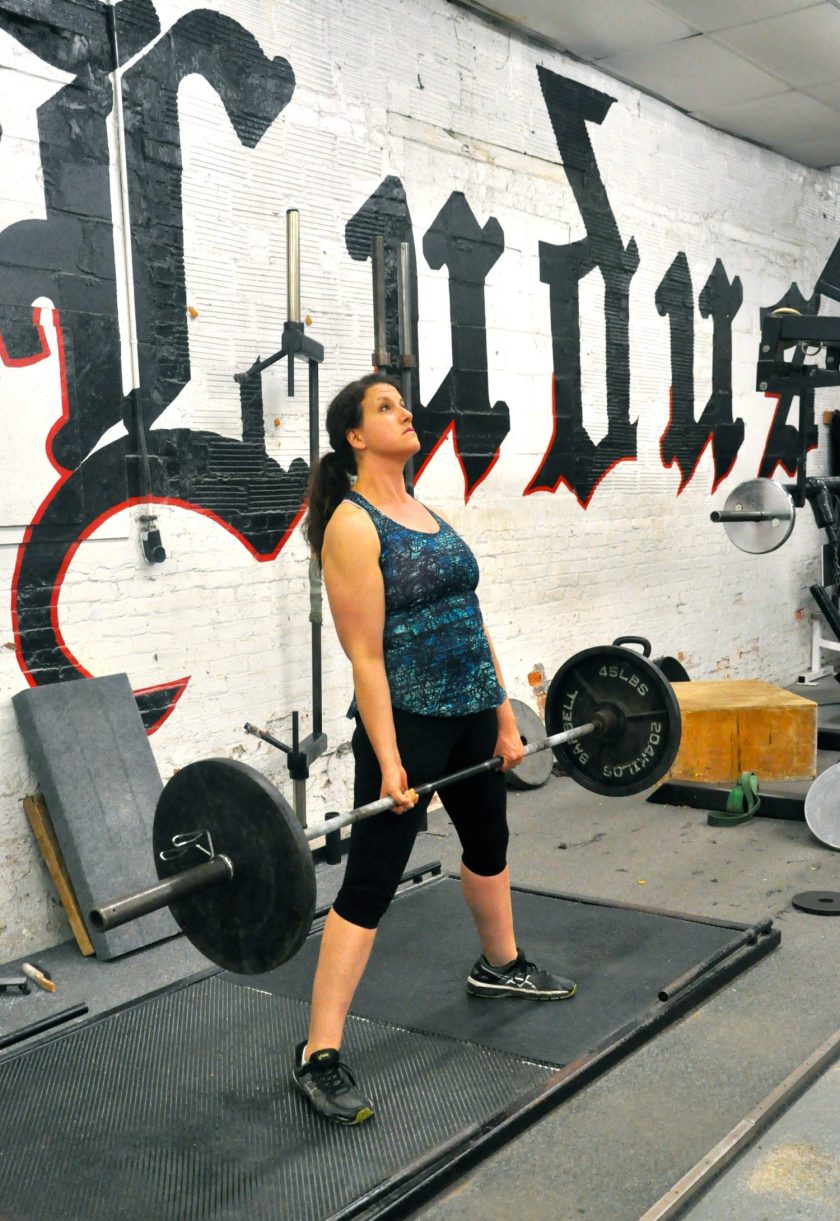 Sometimes on leg day, I feel like I’m going to die. But so far, I have lived to tell the tale each time.

The key word is “feel.” My feelings are not facts. Just because I feel like I am going to die doesn’t mean that I am in fact dying.

I once heard someone I greatly admire say, “My feelings are real, but they are not reality.” I totally missed that memo. I have lived a good chunk of my life ruled by my feelings. If I felt something, that meant it was true, and I had to react to it.

I’m also someone who has dealt with anxiety and panic. When it comes to the “fight or flight” instinct, I’m pretty much all about flight. When something is uncomfortable, or scary, or overwhelming, my first instinct is to run from it as fast as I can. It feels like I can’t handle it. It feels like I won’t make it through. It feels like I am going to die.

So what does any of this have to do with leg day?

When I first started training with Matt at Ludus Magnus, nothing came easily. Everything was  challenging. I couldn’t get to parallel on a squat. I couldn’t do a single sit-up. Deadlifting made my lungs feel like they were going to explode. I couldn’t do twenty presses with 10 pound dumbbells because they were too heavy. 10 pounds was too heavy. I wish I was exaggerating.

So in those early days, I did loads of volume work. There was no point trying to max out on anything because I had no foundation in strength or technique. I had to start from scratch. Upper body day was certainly difficult, but nothing compared to the level of effort required for lower body. Belt squats for multiple sets of 25, sumo deadlifts for multiple sets of 10, walking on the treadmill at the highest incline for 10 minutes, timed sets on the stair-stepper going as fast as I could (which wasn’t very fast).

These were the types of things I did on leg day. And it was really, really, hard. Physically and mentally. My lung capacity, my muscles, my mental endurance were all being taxed to their limits. My body and my brain were freaking out, and the panic response screamed in my ear:

Sometimes I would have to stop. Sometimes it really was beyond my capabilities, and Matt would have me take it down a notch. But most of the time, I wound up being able to do it. Maybe slowly, maybe struggling, maybe having to take long rests in between sets, but the majority of the time I made it through.

Even as the months passed and I made significant progress, I still had anxiety about leg day. I would be driving down to Ludus, and the voice of dread whispered to me… “what if it’s too hard? What if you can’t do it? What if everyone sees you fail? What if… what if… what if?”

But I ignored that voice and showed up anyway. And every time I showed up, every time I made it through, I proved my feelings wrong. I pushed back against the panic response with facts.

All of those little triumphs over my brain’s instinctual wiring eventually added up to even bigger victories both in and out of the gym. I found myself trying new things and interacting with people in a way I hadn’t before. Those who knew me commented that I seemed more at peace, and that I carried myself with a new air of confidence. The training conditioned my mind as well as my body. The gym was a safe place to practice tackling anxiety so that I could tackle it out in the wider world.

Funny story: I had been training with Matt for several months, and had begun doing some max effort work, but volume was still quite challenging. I felt like that meant I was doing something wrong, that it still shouldn’t be that difficult. (Keep in mind that my volume workload increased as my strength increased; I wasn’t doing the exact same things as when I started. But like I said, my feelings are typically unconcerned with facts.)

Also, keep in mind that Matt is a world-record holding powerlifter.

Me: Why is volume still so hard for me?

Matt: Nobody likes volume. I don’t like volume. Volume sucks.

My anxiety is self-centered. It thinks that I’m the only one struggling. But I’m not. Some things are just hard. They are hard for everyone. We may all begin from different levels of skill and amounts of strength, but it’s challenging for all of us. That’s the whole point. If it were easy, there wouldn’t be any benefit.

I’m not cured of my leg day anxiety. It still flares up periodically to remind me of my human frailty, to motivate me to keep working and growing in strength. Just a few weeks ago, I was doing a high-volume leg workout with one of Matt’s training groups, and I was really struggling to get through it, at a level that I hadn’t struggled in a while. I had a moment where I felt (felt!) embarrassed that I was having such a hard time, the tears welled up, and the flight response kicked in hard. I went to the bathroom to collect myself, and came back. I did not run away; I got through it, with the help of my training group and one of Matt’s awesome interns, Caleb.

Once again, I did not die. I challenged my feelings with facts and lived to tell the tale. Strengthening my body and my mind, one little victory at a time.

Are you struggling with anxiety around exercise? Is fear of not being able to do it preventing you from doing it at all? Please know that your feelings are not facts, and they don’t have to rule you. Everyone has to start somewhere– Call or email me, and we can work together to make your start!

One thought on “Anxious Legs”